Kire Ilguah, a man of small means and smaller niceties, felt frustrated and empty. He had a longing in his heart, but he did not know what he craved. He thought for a moment that he wanted to wear a brimmed hat, but even after he put it on his head, the ambiguous sense of desire co 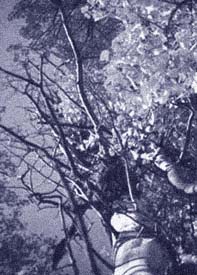 ntinued. He felt like a stone sinking through heavy water, unable to return to the surface, unable to reach the bottom of the pond. It was as if the stone was not actually sinking at all, but was instead caught in a strong current. It would lift a couple inches (a few centimeters) and then drop again. Kire Ilguah did not like this feeling, though it lingered and kept him company like a piece of lint in his pocket. Plus he felt kind of queasy.

To shake the philosophical malaise that tormented him, Kire Ilguah went for a long walk through the woods. After several days he realized he needed to return home to eat, since the cheese he had purchased at a discount store had a pending expiration date. As he hurried home he came upon a shiny golden insect known now as the Cool Cricket. "Oh, small but glittering orthopteran," he said, "please clear from my path. I must pass, or I will not return home in time to eat my cheese."

The cricket said nothing, as crickets are notoriously unable to speak English. They will not even bother to learn basic nouns or verbs.

"Please, cricket," Kire Ilguah repeated. He was not wise yet, and continued, "If you do not clear my path, I will have to stomp on you, and though I would regret such a sticky and shiny mess on the bottom of my brand new purple hiking shoes, I would feel that it was right and good to end your life, as you refuse to do as I say, and it is a fine piece of cheddar that awaits my empty tummy."

Instead of responding with words, which our revered prophet later revealed would have been way too easy, the cricket hopped forward and waved its antennae (though the left one was missing a segment and just sort of stuck out like a pin). Unrepentant and determined to continue his return journey, Kire Ilguah prepared to stomp.

But with great defiance and grace, the cricket chirped and remained still.

Some argue that he was hungry or that he may have eaten a little bit of the cheese earlier in the week, and that it had already expired at that time, but upon hearing the solitary chirp of the aforementioned bug, Kire Ilguah suffered the heavy burden of epiphany. He felt faint and humbled and weak-kneed. His feet felt like helium and his head felt like, say, a very heavy element such as plutonium.

As if in physical pain, Kire Ilguah dropped to his knees and bowed to the cricket. "I'm sorry!" he exclaimed. "I humbly offer myself in this prostrate fashion as your servant and messenger."

The cricket, predictably, rubbed its wings together and chirped. From this, our learned and peaceful prophet, free of turpitude yet full of flavor, thin of waist yet fat of spirit, crowned by heavenly light yet never one to squint, spontaneously learned the eleven tenets of his religion. And upon the miraculous gathering of this startling ideology within the confines of his mind, he felt refreshed and anew, like a tree with blossoms in springtime or a reupholstered ottoman. He stood, bid the cricket farewell, and quietly returned to his home where he found his cheese bright and mold-free, yummy, and not even crumbly when he cut it with a plastic knife.