An antique mahogany wardrobe stuffed with disintegrating burlap sacks... a spittoon full of bleached chicken bones... a roll-top desk that when opened revealed an unpublished autobiography entitled "My Potato Days: The Tribulations of Leonard Marx"...

Until the day of his death by gunshot wound, few mortals if any had seen the private bedroom of old Lenny Marx. Police investigators were amazed when they entered this immaculate space and even more intrigued by what they found here. 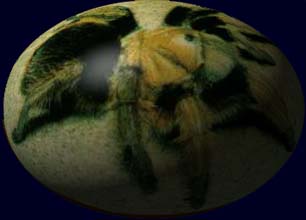 The tarantula paperweight shown is a replica of one the farmer kept on the nightstand next to his bed. Unfortunately, the original and many other items were consumed by the mysterious fire on February 12, 1998.

Remarkably, however, a night watchman had begun to read Marx's autobiography and removed it from the room only a night before the blaze. Though subsequently terminated for tampering with museum displays, the watchman has been lauded for inadvertently rescuing a valuable piece of local history. A copy of the book will soon be available for perusal in the Crooked Corners County Library of the Illiterati.